First I have to make it back to Michigan. Somehow. My family is waiting in a trailer park for me there and I know how my mom's heart breaks and I don't want to see that happen again. So I'm gonna do everything I can.

Then I will bus back to Chicago. Home sweet home. I haven't been back there since Douglas the clown drove Dave and I to Joliette where we started hitching to Denver. I miss that city. I don't know who has spent time there, but if you have I know that somehow, subliminally, we would understand some expansive parts about each other. Chicago is a force. It isn't just a place. It moves of its own accord without worrying about others. It's a cold lover who doesn't miss you; it's the best memories of bad times. I miss biking there the most. Because the city kills without caring, one must become a samurai to survive. And I'm pretty sure I hit some samurai peaks.

I don't know if the people will understand. I hope that people can see the moments that only those smart enough to see into me really understand. I hope they see how far away my eyes get when I catch myself calling a detainee an "it" again. I am going there as a messenger of change, but to do that I will have to be honest. And there are some things that it is easier to idealize than to tell the truth about.

I have done some things and thought in certain ways that do make me guilty of being what they hope I am not. But I was. And I probably didn't have to be.

Maybe I should give you an example.

One day, after I sat by as a detainee was maced, systematically beaten, dragged to the rec yards and shaved in a ridiculous manner that the barbers loved to exhibit, while I was working with a specialist named Helton from my unit, we dragged this man across the gravel because he had lost the thing inside of him which made standing capable. And as we walked Helton talked about how much he enjoyed doing what we do, and again I nervously laughed just right so that I wouldn't let him see I was uncomfortable. But I was uncomfortable. Not because Helton was a psychopath, or because this was a human being in our hands, but because I didn't want Helton to see that I was weak. That I couldn't act like this because I was too delicate.

When we got to last sally-port outside of the interrogation room Helton kept walking towards the pole. I didn't try to stop him. So we pushed this broken mans head into a pole. Because we are sad people. I think about this a lot. So I am not going there an innocent man. War turned us all into cowards and hypocrites, and none of us have much room to stand morally.

I am going there as a bearer of honesty. So that they can see my face and know that even this is corruptible. And I hope they understand.

You much prefer the gentleman
I was before 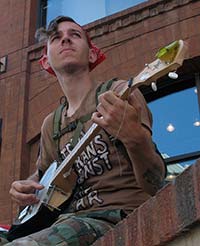 I was 17 years old when I joined the United States Army National Guard in Michigan. My family had been displaced and I was living with friends and I decided to join the military because I had no other options. My family was poor, I was poor, and I wanted to go to school. I was promised a significant amount of money for this purpose - which I have yet to receive. I joined the Field Artillery. Charley 1st in the 119th Field Artillery. We got the orders in October of 2003 that we artillery men would be deploying to Guantanamo Bay, Cuba to be prison guards in a prison camp.

I served on the blocks for two months. One of the ways I dealt with boredom was talking with the detainees about their stories, which led to my being taken off the blocks to work in the detention operations center as the escort control for the next eight months of my tour. In March 2008 I testified at Winter Soldier hearings in Washington, DC. In January of 2009 I joined former Guantanamo prisoner Moazzam Begg on a United Kingdom speaking tour to "mark seven years of unlawful detention, abuse and torture". In March 2009 I collaborated with Aaron Hughes on an installation called Please Sit and Have Tea With Me.

And, I play the banjo.