Drips down my forehead
Stinging and blinding in my eyes
Rolls off my cheek to the butt-stock of my M16
Sweat covered palms shove an older Iraqi man to the dirt
Sweat covered hands zip-tie him, gag him, and place a sandbag
over his head
Sweat falls of my chin onto him as I kick him in his chest
Sweat soaks into the handle of the axe I use to bludgeon him until
he shuts up and stops moving and now I am covered in

Squirts from the stump where the captain's hand used to be,
before the RPG hit
Blood pours from the hole in Richard's leg where shrapnel
has invaded
Blood runs down my hands as I try to cover the wound and<
stop the bleeding
Blood and not much else are left after a car bomber hits, my friend,
Blood in my mouth as I bite my lip, praying the next mortar doesn't land in my fighting hole
Blood all over, once a 7 year old boy in Baghdad discovers what unexploded ordnance is
Blood all over his little sister as she holds him tightly, screaming,
and streaming down her cheeks are

Nowhere
No tears allowed in Iraq, suck it up Marine
No tears at a combat memorial service
No tears until you come home
Tears drown me as I lay in a cold bed, shaking and screaming
Blood, sweat, and tears being shed all over Iraq, all over America

The tears never stop, neither does the blood, but I don't sweat it.

It was just a truck.  A big, green truck.  Not a pickup or a big-rig, but a big, green, seven-ton military truck.  A big, green truck in a barren, desert wasteland that stuck out like a sore thumb.   The cab held 2 Marines and mounted above the cab, was a gunner armed with a Browning M2 .50 caliber machine gun, just like the ones you see pointed out of the sides of helicopters in the popular movie, Black Hawk Down.  In the bed of the truck were 10 severely uncomfortable and easily irritable Marines, seated upon 3,000 pounds of explosives and ammunition; the last place you'd want to be if a rocket-propelled grenade happened to come whistling your way. Fist fights would break out over elbow space and legroom.  That truck was a cramped death trap where sleep was impossible and comfort was a wish no genie could grant.  However, to the boys of 1st squad, Alpha Company, it was so much more than a truck. Everyone had "their spot" in the back of that truck.  Sergeants and corporals got first pick of their spots, while privates and lance corporals got last pick...  I carried a heavy machine gun so I was blessed with being stuck on the port (left) side in the back of the bed.  My staff sergeant's reasoning for that splendid move was so that I could lay down suppressing fire while everyone else dismounted the truck in case of an attack...

The weather was unusually mild on March 25th, 2003 in south-central Iraq.  There was a cool breeze that made our nuclear, biological, chemical protective suits actually a bit manageable in that miserable desert.  We had been stuck in that truck for three days straight and were growing irritable, but that breeze was just the reprieve we needed to stop our bitter grumbling.  It was just a calm before the storm.  The rain clouds rolled in so fast it was like God had dimmed the lights in Iraq.  As the first raindrops bounced off the barrel of my machine gun I heard thunder clap nearby and searched the sky for lightning.  I looked out the back of the truck and saw the truck behind us explode and realized that wasn't thunder I was hearing.

"Fall out, Fall out" our Staff Sergeant screamed as my squad poured out of the truck. Some snipers were taking potshots at my boys while they were jumping out of the truck so I laid down suppressing fire.  I was in the perfect spot in the back of the truck to mow every sniper down.  "Thanks a lot staff sergeant" I thought to myself.  I still hate that spot in the truck.

After I jumped out of the truck I could see what was in front of us, even though I didn't want to.  The vehicles in front of us had been blown apart, including the captain's vehicle.  Before I ran to my position on the perimeter I tried to catch a glimpse of the damage but could only focus on the captain and the bloody stump where his arm used to be.  I was stunned by this gruesome sight but quickly regained a grasp on the situation after I watched my captain tie a dressing around his own wound, pull out his pistol and scream "Let's get these sons of bitches!" I lay in the mud for 18 hours shooting whoever dare breach my section of the perimeter...  Thirteen of us had jumped off that truck earlier that morning.  Eight of us climbed back in that night.

To this day, I can't put my finger on what was so special about that truck.  It was so cramped, so uncomfortable.  I wouldn't get back into that truck for a million dollars.  After that rainy day in the desert I had never been happier to get in that truck.  I prayed I would never have to get out ever again.  Unfortunately there were a lot more days like March 25th, 2003 and every time we climbed back into that truck there were fewer of us.  That never made it more comfortable.  Those of us who were left would stuff ourselves into our old positions so as not to interfere with the space a fallen comrade had once taken.  That truck offered so much pain, so much grief and yet, so much comfort.  No one ever died inside that truck.  It was only when we got out of the truck, it seemed, was when our brothers would die.  I miss that truck.

Burdened And Battered And Buried Alive

I've never felt so alone like I did in December 2005.  I had been discharged honorably from the Marine Corps in July 2005. I missed my buddies.  Other veterans wouldn't get scared when they saw me staring off, unconsciously, into the desert in my mind.  I knew my family loved me, but the son my mother raised never came home from Fallujah.

Anyways, back to December, I had tried to go to the VA in L.A., but got the run-around, so I left for Missouri to find some real help.  I got there in December.  I spent every night in December with a loaded shotgun by my side in case I needed to end the pain, end the burden; I was battered emotionally, and the VA, along with my country, had buried me alive.

I Am Who Survived

I am a Christian
who survived 9 commandments but violated one
Thou shalt not kill
Plain and simple right?
It's more complicated than that
I followed my leaders with a long black crucifix in my hands
I loaded proverbs into magazines and shot them out of my crucifix
I carried bibles in my grenade pouches.
Forgive me father, for I have sinned
I have allowed bearers of false witness to burn you in an oil fire
I have allowed false idols to drop you on innocent victims, killing some, and disfiguring others
I have killed and allowed killing
I shall never kill again
I shall never get lost in the sandstorm of lies and shoot my way out.
Who survived?
I might have, but my faith didn't.

The IED went off
This is what it said
"I'll always be in your head
You're better off dead
Thoughts don't process
You feel so detached
You'll always be my hostage
I killed you so fast
I'm killing you so slow
I'm eating you alive
It's so sad you don't even know
You'll smile pretty with sparkling eyes
You're a terror but I terrorize,
Every night and every day
Where you gonna run?
To your room? To the VA?
Marco polo, come out and play
I got your answer to all of this
A pretty flat black 12 gauge...
I control you

Six Marines In The Picture

6 Marines
3 standing tall and proud in the foreground
3 crouching in the foreground
6 Marines posing in Fallujah, supposedly the "Graveyard of Americans"
6 young, strong men with battle hardened countenances
6 marines in great health posing with rifles, deep in enemy territory
How brave they look, how American.
They can go to any country in the world, kick ass and take pictures to show
the folks back home what their tax dollars are paying for.
That picture of my buddies and I, is forever in my mind, yet slightly changed

Private Perez was killed by a car bomber at a vehicle check point.
There's only 5 Marines in the picture now.

Sergeant Silva lost the use of his left leg after a rocket attack and now is
addicted to painkillers and booze.
There's only 4 Marines in the picture now.

Lance Corporal Dubois joined the Marines to help conquer his heroin addiction.
After 3 years clean and sober, he came home from Iraq a broken man,
and turned back to heroin.

He overdosed two months after we got back
There's only 3 Marines in the picture now.

Corporal Allen's stress and emotional problems got the better of him
and he started beating his wife and children.
2 years after Iraq he's in prison, without a family.
There's only 2 Marines in the picture now.

Private First Class Anderson got dishonorably discharged for drug use
5 months after we came home.  Rather than turn to his family for help,
he wanders the streets of southern California, begging for money, food, work.

There's one Marine left in the picture now, and it's me.
Am I still alive?
I might be physically breathing, but I'm dying inside.
So really there aren't any Marines in that picture
and without those Marines it's just a picture of a shattered city
in a devastated country. 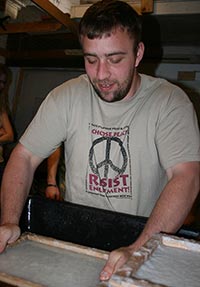 I grew up in Bakersfield, CA, joined the Marine Corps in 2000 and was part of the 1st Marine Division. I served during the initial invasion of Iraq and occupation of An Najaf, Iraq from March 2003 to October 2003 and again in Fallujah, Iraq from March 2004 to October 2004. I am now a student at Southwest Baptist University and a proud father. I am against the war because I believe the mindless slaughter of hundreds of thousands of innocent Iraqis is wrong. If you don't believe that is really going on, then you should join the Marine Corps Infantry and take an all-expense-paid trip to Iraq and see for yourself or shut-up.