One Year In A VA Waiting Room

A year, a week, a day
At war minutes pass like in a waiting room VA
Seconds low crawl by
Like a dust off high
Pulling tension back on the clock hand

I just can’t stand it
This dull alien planet
Florescent tubes flicker
Fully automatic belt fed boredom
I wish the end would just come quicker
Is it Haji, Mujahideen or me on the trigger?

That’s the same plastic Christmas Tree we had in Iraq
Why is it still up with this Easter crap?
Holidays slip past without notice
Like a hand waving in front of a thousand yard stare

No major events to divide the missions
Up MSR nowhere to guard some provisions
Rush hour traffic, you’re late to clinic
Road rage, roadside bombs, an ambush, I panic

A man with a clipboard takes my blood pressure
Where is the pharmacy?
Can you please define “stressor?”
The VA’s a war zone between me and my home
The closer to leaving the longer it takes

Red, white, and blue,
another folded triangle.
A rifle, some boots.
Dog tags that jangle,
like chimes in the wind,
that absolve away sin.
A lone empty chair,
at the dinner table.

Marching in grace,
boot heels that clack.
Present arms, Taps,
rifles that crack.
A well dressed soldier,
presenting me over,
to a crying mother
dressed all in black.

Children stand by,
naive of their fate.
Are paths predetermined?
Will they take the bait?
A boy steps from the line.
It’s a matter of time.
Before he makes an oath,
and Death marks a date.

Medals and ribbons,
and names on a wall.
Statues and movies.
Pictures hung in a hall.
Books about history,
parades on anniversaries,
beckons the youth
to answer the call.

Driven by legend,
the glory of war.
Sharpen the swords,
beat drums once more.
It must run in the blood,
to die in the mud.
I’ll never understand
what this memorial’s for.

Follow the tail lights
The road fades into green pitch
Broken lines like memories,
your traumatic brain injury must stitch
Slipping in and out,
“Maaaannnnn, that’s just the meds.”
You wake up and you’re home,
but you’re homeless, half dead.
Up all night,
to howl at the moon.
Back in your rack,
Asleep till noon.
One thousand night missions,
since your separation.
Pre-combat checks,
with no expectations.
Put on your boots, your tags and your cover.
Another anti-parade march.
“Heeeey, welcome home brother.”
Just grip that wheel hero.
Stay alert, stay alive.
The real war has just started,
Your fight to survive.

It’s me again, just checking in,
like we used to do.
From route warhorse, the JCC1,
from Shadow Two-Two.

Remember when,
we got caught,
pinned down.
Ambushed on an infill.
In a ditch,
taking rounds.

I called for fire,
we walked mortars
up the palm tree line.
You always had my back those days.
Well, maybe not all the time.

Like when I was calling sit-reps2,
from Hibhib3.
When all that shit broke out.
We could have used some help back then
From my fellow Scouts.

Well, we shared some times,
the two of us,
the crazy shit we’ve seen.
I’ll be calling in
from time to time
in a panic or in my dreams.

As I leave my metal box, that I have called home for the last year, I carry two duffel bags. The first is full of the gear and clothing that has offered me survival and protection. The other bag is harder to see with the uncompassionate eye. I have filled the second with guilt. The shame for the part I have played in this campaign in Iraq. It is more useless then the first. However, it is a burden I must carry.

The ritual a soldier goes through to fill a duffel with the maximum amount of gear is a wrestling match. It took every trick in the book to fit all my soul debt into the long green bag. First I rolled everything tight and squeezed it down pinching and tucking to wedge it in. As it filled I punched the sides. I held the edges and smashed my foot into the opening. I dropped it again and again like packing cigarettes. After fitting all my bad karma inside I had to sit on it while pulling and straining to clip the top closed. Out of breath I finally collapsed on top of the bulging bundle.

The duffel will be dragged around with me perhaps for the rest of my life. From home to home. Town to town. Until I am too old to lift it. Then I will lay down beside the large duffel and crawl inside to die.

So when you see a soldier returning home with a duffel bag at a bus stop, an airport baggage claim, or being stuffed into a taxi, think about what is inside the bag. It might be rolled clothing of browns and tans. Or, it could be dark secrets that he will never reveal to his family.

The soldier will not put his burden upon you. But if you feel any responsibility for the weight of it you may carry it for a while if it would make you feel more decent. And if you forced him to open it perhaps every one can take a little with them to relieve the strain of those who served. It might be a reminder that we are all at fault for America's role in the violence in the Middle-East. However, a soldier is trained to sacrifice.

He will take the burden to the grave or make a grave out of it if he must.

Iraqi dirt is everywhere
in my boots and in my hair
the dark clay that soldiers keep
where they march and where they sleep
to prevent the ache in a mothers heart
white sand becomes penned pure art
we exaggerate and bring to light
when the gravel grains are colored bright
under wheels and under track
dirty bombs reality lacks
stuck to sweat under trigger finger nails
that itches and stings when a child wails
dirt so heavy that one can't hide
inside sand bags that divide the sides
turning to grime when it begins to rain
American pride turned to pain
Scandalous chit chat in day to day gossip
"those veterans are insane they really lost it"
closed minds, mass destruction of innocence
and truth gets a purple heart amidst all the ignorance
red white and blue covered in dust
the color of money, oil, and lust
soiled uniforms brown with taint
breathe uranium air contaminate
Jesus pimps our children like whores
like Uncle Sam's hate crimes that the family ignores
under patriot makeup is the garbage and filth
body bags filled with love, swept under the rug is guilt
scum put on sale, but they put us on trial
it's in our teeth when we bite and we smile
grease fed to the masses on the daily news
if the war never ends we'll never lose
we dig and dig, but they cover the hole
when we discover the truth we pay the toll
an unknown soldier in a shallow grave
burdened and battered and buried alive 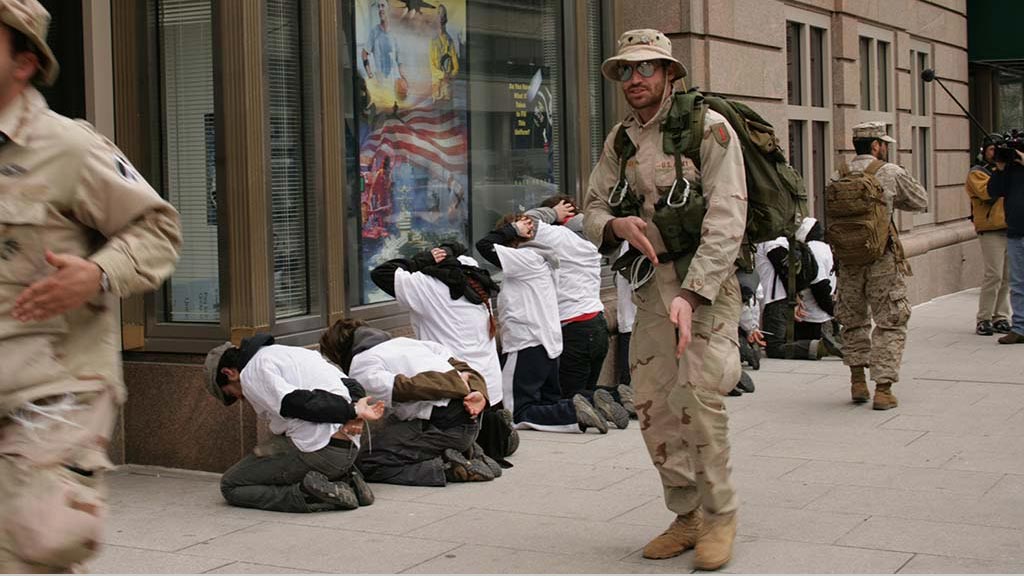 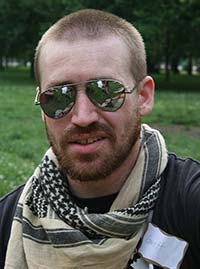 I was a US Army Cavalry/Scout (with the 2-63 Armor Battalion) and completed a nine month peace keeping mission in Kosovo and then I served as a Sniper in Baquaba Iraq. I joined IVAW in 2004 while deployed. And co-authored the anti-war blog Fight To Survive while still serving on active duty in Iraq. I was honorably discharged on May 31st 2005 after being involuntarily extended by a ten month Stop-Loss. Since returning from Iraq I have been an advocate for veteran's rights and benefits and served on the Board of Directors for the Iraq Veterans Against the War.

I am an active Warrior Writer. The lyrics of one of my poems, Letter from Iraq, were turned into a song by the punk band, The Bouncing Souls.

I currently work as a social justice organizer and a veteran advocate in Denver, CO.