Burial in the East

I work nights, he says
surrounding
himself with the terrible dead
shrouded in red
muslin.
I've worked nights
surrounded by terrible
dead
my dead
shrouded in green linen
inelegant
ignoble
sounding their rusted chains and bugles
the shroud of plebs
adorned
to imitate the valor of kings.
But kings we are not
the authority with which we are vested
hangs limp
around the neck of cadavers.

Another drill instructor ruffles a woman’s shoulders, hurrying her out of the stool. “Let’s go recruit. You ain’t winning no beauty pageant.” The drill instructor yanks the apron from around the woman’s neck and shoves it into my chest.

The artificial light blinds me for a moment. I sit on the stool in the center of the bay in what has become a make-shift photo studio—the only installation in the room. Hot lights above, the American flag and the Marine Corps flag criss-crossed behind me. Guttural vulgarities echo through the empty bay as drill instructors fuss with the other women in line. My drill instructor velcros a sham around my neck. It’s an intricate, yet deceptively simple design but she still yanks and tugs at the cloth until she is satisfied. She adjusts my posture with a heavy hand. The collar is fastened tightly at the nape of my neck and the cloth lays flat over my shoulders and chest. The back is uncovered held together with some old clothes-pins. The edges of the cloth are frayed and uneven - a sloppy cut-out of what was once a proud uniform. Blue-black cloth with scarlet piping; pointed collars folded out to a v-neck over a mock, white dress shirt. The gold emblems on the collar and shoulder lapels remind us that one day we will be Marines. But not today. There are four weeks left of boot camp. I adjust a bucket-shaped hat ridiculously on the top of my head and the photographer snaps the picture. “You’re done. Now get out of my face.” I’m yanked from the seat and the drill instructor moves on to the next recruit in line.

Almost twenty years later, that photograph still hangs on the wall in my mother’s living room. The framed picture does not show the rusted clothes-pins holding everything together. It does not suggest anything about the line of women that went before me or those that came after. The photo says nothing of being yanked around for half the day; about the long hours of basic training or the short hours of sleep. And the camera could not capture the bellowing sounds of Marine drill instructors barking, marching and yelling across the bay as frightened, hopeful women waited for their turn to look like a Marine for a moment.

Similar photos hang in mothers' living rooms in many cities. But they don't show the big picture. Had I listened more closely, that mock Dress Blue uniform would have told me about other shams I would wear over the following decade of service. The frayed edges hidden behind picture-perfect precision had much to say, but the artificial lights blinded me for a moment.

We wrote the paperwork
We got the calls
We booked the flights
for the boys
getting the fuck outta dodge.
Boys with sunken cheeks
darkened by the sun,
sand still in their ears.
Boys with only a burden,
beer, and sex on their minds
to soften the edges of
the sins they carried.
Then there were the boys
that left their burdens
in the desert,
draped in flags
to soften the burdens
of the sins we carry.

I don't remember their names.
June 2002, ARCENT Headquarters.
Camp Doha, Kuwait. Raped at the latrines at midnight
by four other service members.

When I served on active duty in the U.S. Marines, I was issued a creed to memorize and embody. A creed is simply a statement of faith, a sort of manifesto. But when hundreds of thousands of new trainees are learning, memorizing, and embodying it every day for decades, the creed ceases to be a simple statement of faith. It becomes a way of life ingrained in your psyche even when you are ready to change your way of life.

For Marines, this statement of a shared belief is the Rifleman’s Creed. The Rifleman’s Creed was made popular in the 1987 movie, A Few Good Men. It begins: This is my rifle. There are many like it but this one is mine. All Marines know it. All war junkies pretend to know it.

The author Marion F. Sturkey explains “No one escapes from the Rifleman’s Creed. Every Marine is trained, first and foremost, as a rifleman, for it is the rifleman who must close with and destroy the enemy. The rifleman remains the most basic tenet of Marine Corps doctrine.”

I wasn’t a rifleman by trade, meaning that my daily job in the military was not shooting a weapon. This makes sense given that only about 6% of marine forces are direct combat roles while all other Marines support operations. But still, all Marines are required to memorize this creed because all Marines can quickly become a basic rifleman in the midst of a war where there are no front lines.

We are asked to live by the creed and told that, no matter what your “job” is, every Marine is first and foremost a basic rifleman.

I wondered then, what happens when our war-fighting skills are not needed? What happens when Marines leave the military and return home with this intense training and dogma, this embodied belief that they and their rifle are ONE?

I couldn’t come up with a succinct answer so I’ve decided to try and unlearn the creed. I am trying un-be this thing we keep calling never-ending war.

This is My Rifle.
There are many like it but this one is mine.
My Rifle is my best friend;

I must shoot
straighter than my enemy who is trying
to kill me.

I must shoot
him before he shoots me. My enemy is trying
to kill me.

My Rifle is human
even as I am human because it is my life.
We will become

part of each other.
What then when we part from each other?
Is it my life.

Before God
I swear this creed.
My Rifle and I

are the defenders
of my life; your life. My enemy.
It is useless.

Not the masters of my life.
Even as I am human,
My Enemy is human.

No, Enemy.
But
peace:

It is my life
and I am human.
Without me my rifle is
useless.
I am not
useless.

It is my life
I will master.
Peace

Will master my life. 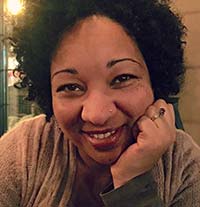 I am a writer, an artist, and an activist from Chicago. I served in the U.S. Marine Corps from 1996 to 2010 and deployed to the Middle East in support of Operation Enduring Freedom in 2002.

Writing has been a lifelong passion for me. When I left the military, writing became a way for me to cope with the complex military-to-civilian transition. Sharing my stories and experiencing those of others, I was able to create meaningful connections with other veterans, artists, and community members - connections that led to understanding and healing. Much of my poetry and art focus on issues of identity, gender, trauma and conflict, but it’s really just my way of healing and trying to create meaning and peace in my own life.

My work has been exhibited at the National Veterans Art Museum in Chicago and other galleries throughout the U.S. I’ve been published in The Journal of Military Experience & the Arts, Paper Dolls, and other anthologies as well as online. I helped form, launch, and manage VetCAT, a veteran's creative arts therapy program. I also helped create Woman at War, a collaborative theater production based on the stories of women veterans in Chicago. These and other collaborative projects have created space for honest storytelling, giving voice to veterans’ experiences and offering us all a way to heal and connect.

I believe our stories are medicine. They can transform our lives. Currently, I facilitate creative writing and ritual/performance workshops where I support women in their creative expression and healing.