Dear Anxiety,
You were never mine.
Stop telling everyone differently.

Dear upper left torso pain,
If my heart is causing this abuse...
they have a hotline for that.

Dear Izod Heart Monitor,
You are not as cool as the overzealous tech said you were.
P.S. stop choking me.

Look here, Anxiety–
I was nice before.
Seriously. Cut it out.

Dear Anger Management,
To be honest, I was only with you
because anxiety was stalking my Facebook.

Dear Clouded Mind,
Now that your shit’s out of my head–
I can’t even remember why I invited you in the first place

Dear Procrastination,
If I let you hang around
it just gives anxiety an excuse
to come over and fold laundry at 3:30 am

Dear Insomnia,
Sometimes we can be productive.
However please do not let me post sappy songs at 4:00 am ever again.

Dear OCD-type Behavior,
Are you high, dude?
Why did you spend two hours hanging pictures but forget to take out the trash? Again.

Dear Overburdened Need for Security,
Why do you lock up so much if you’re just going to give away all the keys?

When your Egyptian cotton sheets
offer the comfort of rusted metal teeth
you find yourself contorting to sleep,
squeezing your bones into the irony
of an empty love seat.

The bird lands, kicking up a storm of sand
that settles in the deepest parts of you,
leaves an uneven deckled edge in your mind.
Nothing will ever fit perfectly again.

They have been gone for some years.
These dog-eared pages are their ghosts,
the tattered stories you won’t let go.

Those bunk beds are
the smashed clock of your twenties.
The gears and springs
lay across cluttered floors.
Childhood toys no longer remind me of youth–
They are priorities that lead to
a sink full of dishes, another weekend of laundry
a bedside coffee pot gives you an extra five minutes

Before waking the boys–
wake up,
skin like a wet bar of soap.
The dresser that held the linen is empty,
lay in the metal teeth.
Roll over and see the only one
staring back from a dirty vanity mirror
is you

“I practice being myself, and I have found parts of myself never dreamed of by me.”
—Jimmy Santiago Baca

A bold and deep quote that I have used as my internal compass since I heard it. Something I may not have ever read or been ready for at all, if not for the veterans’ arts programs I’ve participated in, Warrior Writers especially.

I, like many combat veterans, came back from deployment “perfectly fine.” That’s what we say so the battalion will let us go see our families after being away for the most life-changing months of our lives. Lying to myself and everyone else that I was fine slowly ate away at me. As life piled more rocks in my pack it compressed the combat experiences down inside of me like old nitroglycerine, making me unstable and prone to eruptions that were changing me faster than I realized. Then it went off. It didn’t cause a massive eruption that landed me on the 6 o’clock news. Instead, I imploded, like a sink hole of depression and guilt. I piled more responsibilities on myself to try to retain some self-worth.

Struggling as a single parent, I finally broke down and went for help. Weekly visits to Fort Belvoir’s Behavioral Health did not go much deeper, at first, than the lie I had told everyone else about combat trauma. After all, I was perfectly fine. I had “bitten off too much,” and I was “spread too thin.” That was my excuse for why I was in the office.

As I whizzed through the psychologist’s stress management tools and organizational life books, I started to realize how much I hurt inside. I asked for a referral to Outpatient. It only took one session of me being honest and explaining I wasn’t fine to find myself as a patient of the Co-occurring Program. I still wasn’t able to really grasp the concept of the problem though. At first I would go into a very controlled, clinical environment of people who were in varying degrees of perfectly fine. We would share experiences, thoughts and occasionally warn each other about which prescriptions to avoid. It would not be enough to drag me out of myself. I participated, and I talked, and gave advice, and it was spinning my wheels. I would dig up all this stuff and then go home where it would just sit on me. I had no outlet from 1630 to 0800 while outside of the clinic, but in my own head.

Then came the week when Red Group (combat trauma) went to writing group. That’s when I got one of the most real pieces of advice I had ever heard: “Healing through writing is evidence-based when you dig in and you’re honest with yourself. Write not just the sitrep version or the emotional version, but a combination of the two. It’s gonna suck, you may feel like shit for a day or two, but once it’s out, you will improve. That being said, if you need to talk to someone after this group, make sure you do, and be kind to yourself.” That came from Seema Reza, and holy shit, it got my attention! So I listened to a poem by an artist I’d never heard of, an artist I previously would have written off and ignored. Then something happened. My pencil was moving as fast as my med-fueled brain and I related to the work. It opened up a little part of me that could be honest in a room full of strangers, that we were not perfectly fine.

That’s when all the clinically-learned tools and lessons started to sink in. Not a lot, but a little bit. I went to my group sessions and my one-on-ones, and the internal gears were spinning enough to give me direction as to how I was going to whip this thing inside of me. Then came a workshop presented by Combat Paper NJ and Warrior Writers. That’s the week when the steam really kicked in. The combination of Warrior Writers (using the same model of reading a poem, then writing in response to that poem), combined with the visual and physical process of hand-papermaking and printmaking, started to peel back layers of myself. The more it did, the better I felt, and the more creative I became.

I have been asked several times why I think these programs help so much. Here is my answer: It was a way to take my self-perception out of the picture and focus on something I felt people wanted to hear and see. It was different than giving a play-by-play of my Alive Day and telling a therapist I was on an emotional pain scale between smiley face guy and grumpy face guy. It gave not being fine a creative purpose and a way to be productive. Now it’s not a pity party anymore. It’s “Yes, I made this piece of art, yes this is my story, and yes I want to share it because I am a combat vet and I was not fine…’til later.” I still struggle and, for that reason, I make art.

Since that week in February 2013, I have been in four Combat Paper/Warrior Writers Workshops. In the last two, I participated as a facilitator. I still go to every writing group I can because they work. I am proof, and I’ve seen more first-hand from the community of veterans that has grown up out of these programs. From writing groups to words to song, Warrior Writers and Combat Paper offer the opportunities to perform and/or show your work. It builds that crucial link I didn’t have before I got involved with art: the communication link. 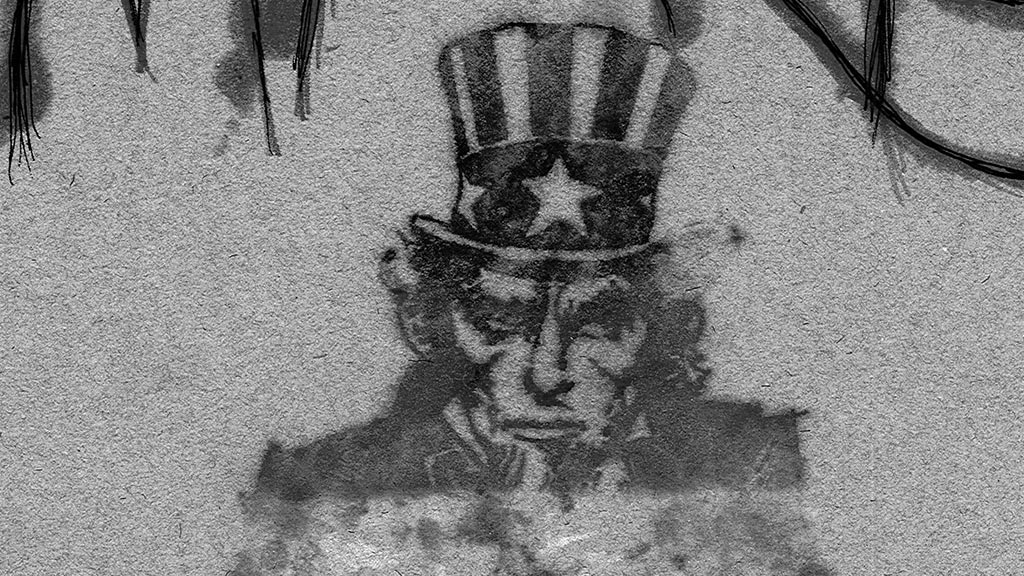 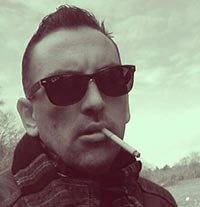 I enlisted in the Marines in 2006 and spent four years with 3rd Battalion 8th Marines as a machine gunner in a Combined Anti Armor Team Platoon. I was stationed at MCB Quantico in 2010, where I taught Machineguns at T.B.S. In February 2013 I was introduced to Combat Paper NJ and Warrior Writers and I have attended workshops and conferences since. I am now a facilitator with Combat Paper NJ. I go to every writing group I can because they work. I am proof, and I’ve seen more first-hand from the community of veterans that has grown up out of these programs. From writing groups to words to song, Warrior Writers and Combat Paper offer the opportunities to perform and/or show your work. It builds that crucial link I didn’t have before I got involved with art: the communication link.