So, I guess you've heard about the controversy at the prison in Iraq...the abuse of Iraqi prisoners.  It's been a strange past two days since I first heard.  That's the same prison I'm heading to.  A wave of feelings has rushed through me.  Mostly contempt, bewilderment.  The photos are horrific, and that's not what I was trained to do.  I don't exactly know how to process this. For the most part, I know what the leadership of interrogation facilities do, and I've also heard that the military police (which is who the six perpetrators are) are not well educated in the Law of Land Warfare, or the Geneva Conventions (of which Interrogators have to be specialists).  But when I hear the prisoners being called "detainees" it troubles me.  Detainees have fewer rights than prisoners of war.  POW's have special status as lawful combatants, heightening their Geneva Convention provisions.  Since these prisoners are being labeled other than POWs, I don't know just how far envelopes are being pushed...The angry side of me wants on the first plane, and to be pinned my sergeant stripes as soon as possible so that I can have some authority and ensure that nothing of the sort happens under my watch.  Then the "what the hell am I doing" side of me shows up, wondering what a blond, blue-eyed Iowan boy is doing in Iraq in the first place ...at least with Caesar's body armor and an M-16.

Medals on the Rocks

We stand in line at open ranks interval, pissed as hell because we should have been dismissed already. A sound lingers in the early evening air, but it's not the call to prayer. We've been ordered to get awards. More awards. So we stand in line. A small precise man takes one step in front of me. Captain Wojak, Frank is his name, does a left-face. I salute, holding back laughter. I simply can't take the irony. Frank's grinning too. He has to know how ridiculous the words "valor" and "loyalty" read when written about an award pinned to the next future conscientious objector. Right face. Step. Left face. Salute.

We walk away shinier than when we came, moving rapidly before anybody remembers about cleaning the latrines, or the unfinished leader development counseling we seniors of the junior enlisted were supposed to complete before close of business. Brian already has some rap lyric on his tongue. Fahid is whining out a usual "God damnit!" Jimmy didn't show up for formation. No big surprise. He's got the bottles cracked already back at the barracks. Mark is being held up at the congratulatory gaggle behind us. Some NCO just can't seem to understand why Mark doesn't want to be promoted.

"When does drinking start?"

Matt rolls his eyes with a cool nod of acknowledgment. We walk on because there's nothing behind us to care about. Somebody else yells that nickname "Priest" in my direction. I don't consciously think about how alcoholism would be a relief. A name. Some tangible corner to place my problems. Matt calls me Priest because I pray more than I drink or curse. But not recently. It's Priest's turn now to ask who brought the gin. Something's gotta give and we all want reminders of pain less horrific than medals. Medals are the idealists' whiskey. To us, they add insult to injury over the meaninglessness which has been the past year of our lives. So just let it give. Let the knees buckle and the eyes lose focus. And please just pay us enough respect to let us choose our own method of intoxication, rather than make us suck down shiny honor on the rocks.

Standing in formation, waiting to get drunk. Standing in front of Frank, the both of us grinning. The other Miller, Lieutenant Colonel Miller, our battalion commander, wrote an award memo back in Iraq claiming Frank was the finest company commander in the 202nd MI BN. I stood behind the colonel while he typed at the control post, reading over his shoulder and nodding my head. I liked Frank. A bit doctrinaire, but I could always sense traces of humanity underneath the crisp uniforms and encyclopedic knowledge of firearms and squad tactics. So the finest commander of the battalion stood in front of me. Pinning an award to my chest. The Joint Services Award Medal. Something that sounds great in hometown news releases but basically means "didn't get in the way too much". I gave that medal to my friend Brian while we drank beers in front of our room. Frank didn't pin Brian. Pinned Matt and me and about everyone else in the company, but not Brian. We tossed around medals like beer caps and cigarettes. Put a few medals on a life-size cutout of President Bush, too. Mark saluted Mr. President every night before bed. I stood in front of Brian, grinning. Saluted him and told him I'd write him a memo.

For weeks the front of my barracks room looked like a Pantera concert in a glass factory. Everyone seemed to congregate at Brian's and my door. Jimmy would bring the kind of inebriation you can smell through skin. He'd bring a guitar too. Jimmy had seen more shit than anyone in the battalion. While the rest of us had been jerking off to magazines we'd ordered online from our internet-ready Soldier Zones, or purchased from the PX, Jimmy was wading through corpses in Fallujah taking fingerprints of dead Iraqis, or attempting uselessly to turn himself in to CID as a committer of atrocities. One day I would wrestle a bottle of gin out of Jimmy's hands, trying to make sure he didn't screw up his chances for a medical discharge that was honorable. The next day I'd take a hit of that bottle of gin, and drink a beer out front with Jimmy while he belted out Sunday school songs. "The Lord said to Noah, there's gonna be a floody floody...Father Abraham had many sons, many sons had father Abraham. And I am one of them and so are you. So let's all praise the Lord!"

"C'mon, Priest, sing along!" Jimmy'd insist as he passed a beer to the hand that yesterday wrestled away his bottle of gin. The next day Jimmy would be knelt in front of my asking me to hear his confessions. I told my mother all of this. Even Jimmy's confessions. I'm not really a priest. It's just what they call me. "There's only so much I can handle singing songs that mock my upbringing, Jimmy." But I sang the songs. What's one more contradiction? We were all waiting for a floody floody. Flood out the barracks. Wash away the broken bottles in front of our door. Flood out the company. Wash away the counseling statements, medals, promotions, and vacant time already inundating our days. Flood out the entire Fort Gordon installation. Just let it be swift. And let there not be a boat in sight.

Then nearby we hear a BOOM! Chairs leaning back against the wall suddenly crash to the floor. Preston starts running around the corner. The guy sitting on the ledge narrowly escapes falling to the broken glass littered beneath him. And all of us make like we're moving to White status. For about 3.2 seconds we're stammering for our body armor, putting on Kevlars and slamming magazines into our M16's because it'll be Amber status any second. Then Red. We don't notice that we're all wearing civilian clothes. That we're nowhere near West Baghdad or Abu Ghraib. Mortars don't fall in Augusta, Georgia. Five seconds pass and Preston reemerges from around the corner - no body armor. I pick up my chair and steady it back against the wall. A simultaneous exhale brings the threat condition back down from White to Green, then to Nothing. Then a little nervous laughter, bottles passing, and a dump truck pulls away from a huge, now empty, metal trash bin.

I tell Jimmy I want him to fill out a DA Form 2823, providing sworn testimony to the attack we've just survived. I want my medal for that. 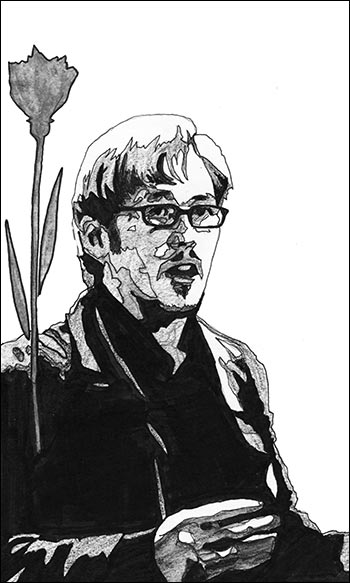 Joshua Casteel served with the Army's 202nd Military Intelligence Battalion as an Arabic translator and U.S. Army interrogator inside the prison at Abu Ghraib. He returned to the United States in January 2005, submitted his CO (conscientious objector) paperwork in February and was honorably discharged in May. After returning, Joshua was active in the peace movement, serving on the board of directors of Iraq Veterans Against the War and chairing IVAW's Religious Dialogue committee. He attended University of Iowa graduate playwright workshop, wrote two plays about his experiences in Iraq, and earned an M.F.A. Joshua’s story was featured in Robert Greenwald's documentary film, Iraq for Sale: The War Profiteers. His book, Letters from Abu Ghraib, was published by Essay Press and excerpts from the book were printed in Harper's Magazine.

Warrior Writers mourns the loss of our family member, Joshua Casteel, who passed away on August 25, 2012, in New York City where he was seeking experimental treatment for cancer.