Musings From a 25 Year Old Military Police Sergeant In Iraq
Or...
How the hell did I end up here and when can I go home?

I do realize that, when I do write in my journal, I usually don’t write about the present, about what is actually happening in real life, here in Iraq. I guess that is because I hate being here so much and feel conflicted, hypocritical, and weak. So, instead I regress into daydreams. Well, the moon has finally made a comeback this past week. It started out as a fingernail clipping offset to the left by the pinprick of light that is the Evening Star. Then it looked like the eye of that sad owl we found. Now it is bright white, half of the face showing. I really like how the “man in the moon” really looks like a face.

The trees here are amazing. How they can be alive is a testament to the will to survive. They are tall and bent from the wicked winds, limbs and long needles hanging limply from their leeward sides. “Green” would not be an accurate color to describe them. Rather, they are grey, brown, tannish, and olive drab. They look as though a giant grabbed them by their trunks, tore them out by their roots, and violently beat the ground with them repeatedly. In a rage, knocking off needles and branches, and bending the limbs and covering the trees with dust. Then the angry giant calmed and jammed the trees back into the ground.

Everything here looks half dead, hot and starved, and waiting for an opportunity to die or escape. The skinny, panting fox with the ridiculously big ears who stole bread from our truck, the big owl with the orange saucer eyes that gave up and died of heartache and old age, and the camels that plod slowly and awkwardly through the desert, knock-kneed with dreadlocks of fur, their faces perpetually looking dopey, but with a smile. The Iraqi people have the same desperate look because of a life of hardships from every direction. Poverty, hunger, war, and heat. Everything makes them have sketchiness about them. It is as if they are equally likely to cut your throat for the bottle of water in your hand as they are to warn you of a planned attack against you and your troops, and then invite you into their house for tea and a nice meal. And this could be the same person.

The kids are all skin and bones. They do not wear shoes or go to school. They know just enough English to beg for water and food and look young for their ages with too-big heads and eyes that look too old for children. Boys you could swear are only nine or ten have mustaches. There was one guy selling ice and stuff at the fuel point. He had the most amazing eyes. They were pale blue, milky, and obscure, like thoughts of a hidden lagoon. I don’t know, that sounds dumb, but I’ve never seen eyes like that before.

I am really only ever sort of happy when I am not working. And, oh goddamn, I have to go back to work tomorrow. Shit! It’s patrols. I hate g.d. patrols. They are risky business. I do not like dealing with the Iraqis. I loathe it, disdain, abhor, hate, etc., etc. Maybe I will have sweet dreams tonight and they will leave me feeling happy when I wake up.

Women wailing
All in black
Such an outpouring of grief
Vocal, physical, collective mourning
When did we forget to mourn?
As a country, as individuals
Where is my grief?
What do I mourn for?
Rarely it comes, but it comes in waves
Sobbing for what has been lost
for all of us, for humanity,
for that old man throwing himself
fn the ground over & over & over,
screaming and grabbing his head.
The loss surrounds us forever
As it always was and always will be.

War Is Not A Video Game

I joined when I was 17. I was still in high school.
I really didn't know much about the military.
Talk to a veteran,
talk to someone who has just come back from Iraq.
See what it was like,
because it is not what you see on video games
or in the movies
or read about in books.
It's not this piece of glory.
It's not heroic.
It's scary and
it's horrible and
People die
people get wounded
people come back changed forever. 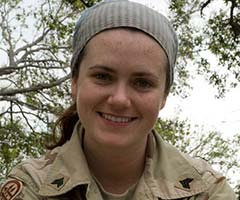 I grew up in the small town of Canon City, CO and joined the Army National Guard in 1996 while in high school. I trained as a medic, but was deployed to the Balkans, and later to Kuwait and Iraq, as a military police person. I was part of the initial invading force, entering Iraq in March 2003. I spent my year as a military police sergeant in Iraq patrolling endless miles of Iraqi deserts and villages, escorting convoys for military contractors, setting up check-points and guarding broken down vehicles. I was shocked at the everyday violence and dehumanization that our military occupation brought to the people of Iraq. The story told by the media and politicians, and the story many of us told ourselves, was that we were bringing democracy and freedom to an oppressed people. In reality, I was pointing my weapon at ordinary people in order to guard corporate profit. After returning from Iraq I helped co-found Iraq Veterans Against the War in July of 2004. My involvement in IVAW led me to Warrior Writers. I believe in the power of art and writing to transform traumatic, life-changing experiences into understanding and healing. I currently live in Grand Junction, CO on the Western Slope of the Rockies with my husband and two-year old daughter.