Simon, you’re a survivor,
lived through the bombardment,
outlasted the conscription

& you speak for us
but not for us, silver tongued,
eyes hidden behind ballistic shields.

I’ve warned you, if I catch you
in a lie… maybe on patrol, in a courtyard
after we’ve dug up their cache.

It’s been nearly six years, I’m sure you’re
at home on your couch, boys looking up,
listening, war stories, yours and mine

remember the time – we ducked
and ran –weapons company would

or did the Fedayeen get to you,
did you pass with the Carabinerie
that October day?

And so you know I have boys now,
too young for war-stories, and I
recreate you in my dreams, watch you stride away.

Stealthy movement through the ink black sky,
the hunters made their way.
No talking... nothing to give them away
Every action, deliberate, slow... steady.

The senses labor in overdrive,
The stench of sewage pervades,
wafting about the air in unseen rhythms,
flowing along in miniature rivers.

RAT A TAT TAT!
A quick burst drops him to the ground
The silence is broken,
Shit! The bastards not dead, RAT A TAT TAT!
Three more to the chest,
away he stumbles
The coup de gras delivered.

It was his fault, he lunged at us
What were we to do?
Damned dog!

Is this the one, the one in the photos?
Boom! The door is unhinged with a swift kick,
Clear!
Move!

The high walls are scaled skillfully,
quick, double time to the next target.
No knock at the front door, dynamic entry is the key.
Watch out, little kids.

Slowly, deliberately the safety is taken off
AK-47, Kalashnikov, the instrument of death is made ready.
Click, a drawn out sound, made stealthily
Crack crack crack crack crack,
With a sudden burst the symphony begins.

The still night is suddenly awoken from her sweet slumber.
CONTACT RIGHT!
With a thundering crash, the metal bees search for their targets
buzzing around men's head's.

Move!
Thunk... flash is the report from the 203.
Boom as the door flies off of her hinges,
Quickly, in, find them!

The din envelopes the listener,
the sound of death.
Suddenly quiescence is restored,
AK 47, Kalashnikov is silent!

Holding It Down: The Veterans' Dreams Project

Space Behind My Eyes

The Hudson, under a coverlet
of fog. A freight train rumbles along
the cliff face below Jose
& I. I hear thumping, thump
thump & I look up
trying to discern from which direction
I hear the helicopter. There is no helicopter
just a train. I tell no one except you
reader. Keep this in confidence
Thump thump. I laughed with Jose
about the steepness of the cliffs &
he said: The British were never able to capture
West Point. Grape shot.
Grape shot would’ve cut them into pieces.
& the Hudson is dark & deep & cold.
Can nearly hear the British.
Ships shattering stink of Redcoats bleeding.
I sigh
because I know what it sounds like
guns going off I mean.
A light rain the cliffs grey the Hudson hidden

Reach out & touch them tell them
their mission will always fail because we
can see the heat of their bodies
radiating against cold night. You want
to reach out & turn them around, say go
home to your wife, go home to your children
but they come, the Euphrates their highway
in small boats lugging Kalashnikovs
to die on the river’s now naked shore
they die on the river’s edge dovetail
rounds & claymores & hand grenades
people say you never hear the bullet
that kills you but how would they know?
these Iraqi men, spirits in thermal sights
knew something I didn’t I’m just
understanding a decade after. Next
morning we searched for their bodies, maybe
in pieces maybe in the park where children
played soccer & we found nothing except burnt ground

Holding It Down: The Veterans' Dreams Project

Dijla Wal Furat, Between The Tigris and The Euphrates 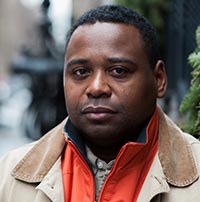 I am a former Marine, a poet, essayist, and playwright, whose writing has been featured in the New York Times, The Daily Beast, Sierra Magazine, Epiphany, Callaloo, Narrative and others. My poems have been translated into French and Arabic and my theatrical works, Holding it Down and Sleep Song, collaborations with composer Vijay Iyer and poet Mike Ladd, have been produced and performed at New York City’s Harlem Stage, Washington DC’s Atlas Intersections Festival, in Paris and in Antwerp. My play, Dijla Wal Furat, Between the Tigris and the Euphrates, was produced in New York City by Poetic Theater Productions in the winter of 2015. I am a graduate of Columbia University and New York University with degrees in Creative Writing. I began working towards my MFA in Playwriting at Brown University in the fall of 2015.