A subtle transition to what is next and it’s time to open heavy doors with many locks for which I have no keys
I have been reluctant to peek around corners for fear of discovering untrustworthy eyes
I’ve been sweeping the ground with my foot and continuously looking down
even though the landscape is so radiantly beautiful when I look up
This frozen reservoir has had less than its fill of rain and snow but far more struggle than its weary dam can hold
The moon throws sucker punches at it all night, bouncing them off Jupiter and making the sky black and blue from contusions while red and purple mornings beg for mercy
These barren rocks look like gravestones that are ecstatic to have such astonishing views
The sun peeks over the horizon just in time to kick everything out of my dreams

Strangers with fiery eyes repeatedly ask me if I’m lonely as though they are offended by a man drinking alone in public
The look in my eyes tells them that there is little room left in my life for smiling, but goddamn it, I try
I’m often too early for happy hour but always too late to let anyone through the back door after hours
There is sympathy and thanks written on napkin from a stranger as my story becomes me
Yes, you may have read about me in the papers and yes, I am a veteran
As if I didn’t wear it on my sleeve, as if you couldn’t tell by my complete lack of presence

My jaw clicks with each drag and my shoulders tighten to hold my heart up as it bangs a tuning fork off my spine to play the perfect pitch of my hands shaking in nervousness
When did that butt can begin to overflow? I don’t remember stepping outside so many times because I’m afraid of shooting stars
Joe called me late last night to remind me of that time he thinks I saved his life
A cut wire mishap and a strong survival instinct saved mine
I’m not speaking metaphorically when I say that the gunfight I planned on having with myself was cancelled on account of the armory being out of ammunition
And I’ve had years of “why am I not surprised” moments like when that Frisbee collided with my face after reconstructive surgery, or that time I woke up in my car breaking through the ice in that cold canyon creek
I don’t want to give anyone too much credit for the damage report because everyone has their breaking point

On the sidewalk, someone inscribed a subtle message within a chalked out heart that read, “Remember to Breathe”
Since returning home, it has become increasingly more difficult to breathe
So I’ve been picking up the pieces of my skin that finally shattered after a sledgehammer pounded these images of war and cavalry into my body repeatedly
Snow begins to cover the freshly scattered ashes of a dead banjo lying on the ground to remind me of the last time I was able to breathe without a prompt
I don’t feel anguish for my bleeding eyelids that have been seared and stitched shut
I’ll be just fine. It just may take forever to put all the pieces back together again

I’m intentionally vague because if you really heard it through my monitor, you’d get too much feedback at once

Let me clarify a bit..you see,
they used to call me “Big Sarge” …on account of my overwhelming stature
Let’s be honest, i spent more time as a private trying to perfect the push-up
When i got home from Baghdad, they said that i was brave and that they were free
Shortly thereafter, the Army and I decided to start seeing other people.
They started seeing younger, less broken people
and i started seeing counselors, liquor store clerks, bartenders, and dope dealers

Couldn’t keep it together in academia so suddenly..
You’re a bartender, working for someone with fucked up priorities
Going home in the early daylight hours to punch your mattress and scream into your pillow
Putting holes in the walls got to be too painful and expensive
This ain’t life or death, people, but all these sights and sounds got you thinking about human remains
The next thing you know, you’re hating everything and fighting everyone about nothing
with crippling fear and confusion and lack of purpose
You see everyone as a potential threat as you fade in and out of reality
lost in cadence, staring through blinds, muscles are so tight

Ghosts carved deep gashes into the walls of my yesterday
Skeletons paced elegant caverns into the floor of my closet
There is still a monkey on my back but
It’s not too heavy because I invited him for tea this time…and he stayed
He has taught me tomorrow and at this point, I’d hate to see him go
He’s become my friend after all these emergency sirens we survived
we don’t really communicate that much anymore, because realistically
It’s the 800 pound gorilla squirming on a stool in the corner that I’m more worried about.
Subtly reminding me of the things that I was asked to do when I was far too young that left bullet holes in my vision when I was trying to sleep
Left me waking up in a hospital bed with my eyelid sewn shut.

I get anxious when I wake because I used to wake up to bomb blasts…a lot…
I think I still do in my dreams
Now these ideations involve cops, horses, dead friends, an ex-wife and mangled cars that make real scars
So I’ve been moving into position to eat these triggers one distraction at a time
Not the kind of triggers that bury hammers into rounds intended to kill people
But the ones that make one to wake up sweaty, to bang head off walls, and throw objects across the room
No more fists and pointed finger tips
It’s just that these.. are reasons why I hesitate to even begin sometimes
My nervous system is still nervous
This...is my therapy
I want all these memories to bubble up to the surface so that i can swim past them but I'm addicted to more and again….
If i were perfectly honest, i can’t always tell you what it’s like to come home from war because sometimes…all i can feel is numb

Too Much, Too Many, and Not Enough

I want to introduce you to my friends; Too Much, Too Many and Not Enough
Too Many was addicted to more and again
Too Much was hooked on much of the same
Not Enough was not like the other ones
Too Many had a case of always wanting more
While Too Much was looking for an escape route
And Not Enough just needed nourishment
Too Much said, “enough is enough”, and climbed up into the mountains
Too Many used again but he swears he’s gonna quit sometime
Not Enough gets cold in the winter

Too many times we’ve been through this,
where someone says they have had too much when there is not enough love for life left
in the world and the survivors are left to retrieve the departed’s body from a noose in the woods or soak up brain matter with a sponge and a bucket
Too many unheeded cries for help from the abandoned and tormented
There is not enough fairness to go around and there is far too much indignation than is earned
It is cliche to say this too many times all the while not enough gets done to fix it

Too often, Too Much did things to the maximum
He approached life with not enough caution to continue
Sometimes, Not Enough had too many moments he could not remember and now he lacks the courage to get out of this endless loop
Too Many said, “Enough is enough, enough is enough, enough is enough”, so many times over and over again that the words lost meaning and his throat bled out
No one was there to notice because Not Enough forgot to remember to reach out while Too Many had had much too much, and Too Much had far, far too many of Not Enough’s “false cries for help” and now Not Enough is no more

So I implore you to listen to each other and acknowledge one another
Saying hi to your neighbors or a stranger isn’t all that difficult
No need to bore each other with benign small talk
Just realize that we have all been through a lot, otherwise we wouldn’t be here at all 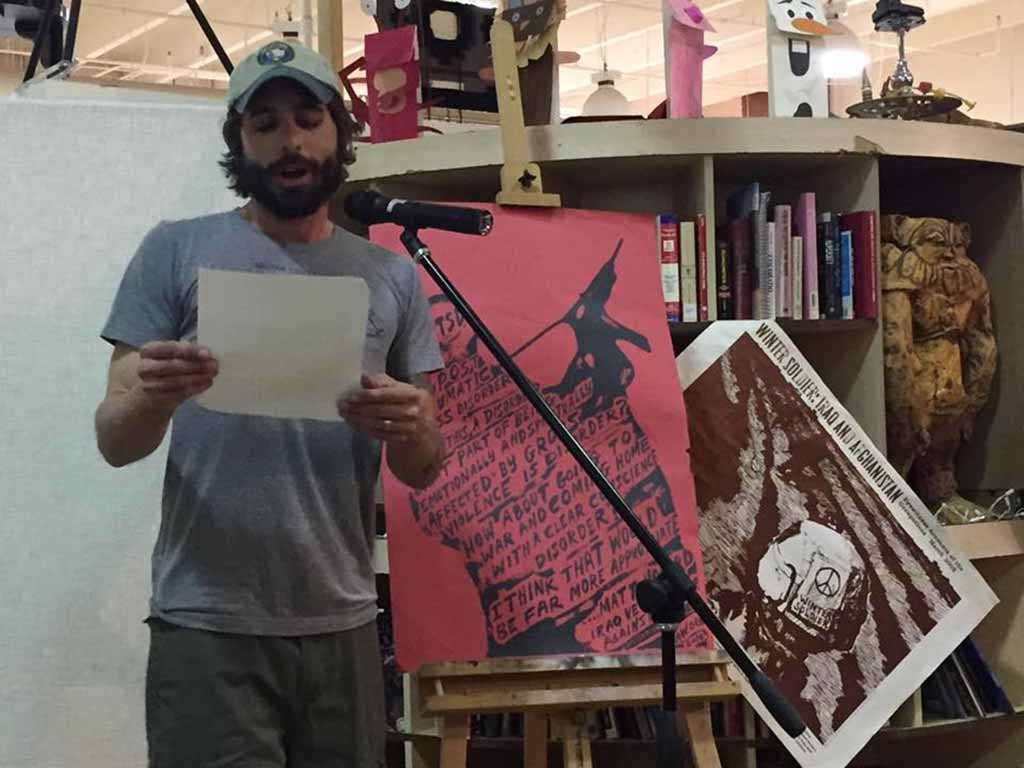 I served as a heavy equipment operator in the Army Reserves from 2002-2006. I was deployed to Baghdad, Iraq from February 2004-2005. My unit, A Co., 458th Engineer Battalion, was attached to the 1st Cavalry Division and was largely tasked with force protection and IED hunting (Task Force Iron Claw) in the greater Baghdad area. After my involvement with the Global War on Terror, I joined forces with Iraq Veterans Against the War where I began to use my “boots on the ground” experience to speak out against the war. My activism would take a physical toll on me in 2008 when cops in Hempstead, NY nearly took my life at a demonstration against the war in Iraq.

I began writing about my experience with war while I was deployed. It was mostly journaling in an attempt to stay sane. I began writing in a more poetic sense when I returned home and sought some sort of outlet to escape my detrimental thoughts. In 2008, I discovered Warrior Writers and have participated in various events across the country ever since. I have extended my experience to local veterans, facilitating workshops and organizing public readings in the Front Range community. For two years, I organized and facilitated monthly open mic poetry readings at my coffee shop in Nederland, Colorado.

I currently reside in the mountains near Nederland, Colorado. I have a civilian background in forestry, entrepreneurship, and the nonprofit sector. I have a bachelor’s degree in ecology and evolutionary biology, an associate’s in business and a certificate to teach English as a foreign language.