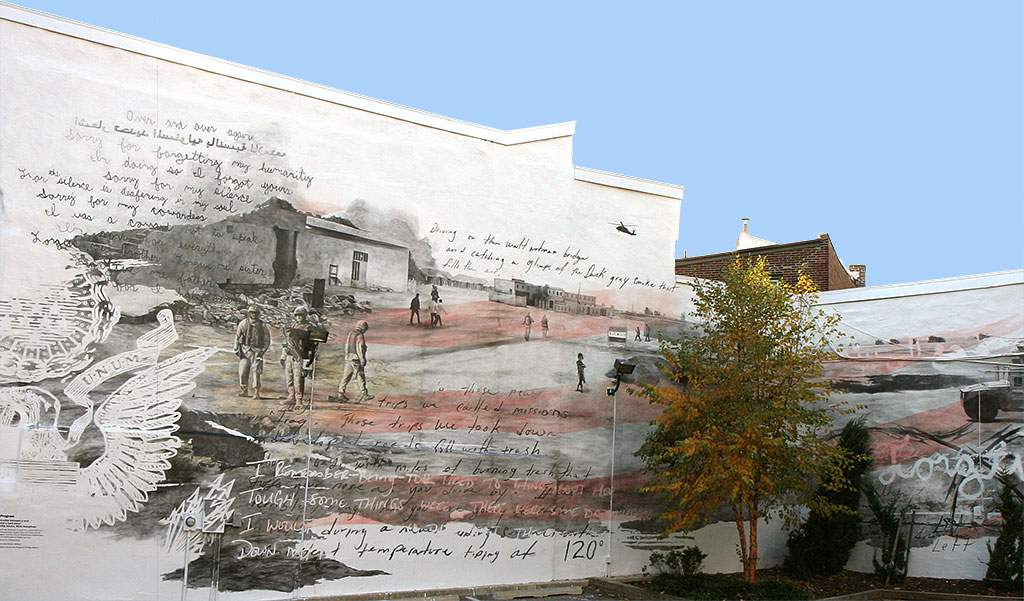 Communion Between A Rock And A Hard Place

On Nov. 12, 2012, Warrior Writers and the Mural Arts Program dedicated our mural, Communion Between a Rock and a Hard Place. Located at 4129 Woodland Avenue in West Philadelphia, near the Veterans Affairs Medical Center, the mural reflects parallel worlds: Baghdad and Philadelphia. Designed by Phillip Adams and Willis Humphrey, the mural is actually two facing murals depicting a scene from Clark Park in Philadelphia and scenes from Iraq and Afghanistan. Warrior Writers was approached by the City of Philadelphia Mural Arts Program, which received funding from the City of Philadelphia’s Department of Behavioral Health for a project focused on post-9/11 veterans. Together, we organized a dozen workshops, where veterans swapped stories, networked, and made art. This art making and community building led to the conceptualization and design of the mural. The design incorporates photographs and writing accumulated during our workshops, and mimics the technique of photographic transfers for the overall aesthetic. It is meant to give the viewer the sense of being between two worlds, worlds that are separate, but apart. Veterans can never fully leave either of these two worlds.

“There are veterans all around us coming home. They are in our communities, whether we know it or not. This is the reality of my generation. It’s so important for veterans to not have to keep their stories silent.”

Photos of the Mural Installation

Photos from our Mural Dedication

Press about the Mural
Iraq and a Hard Place